Welcome To The Future 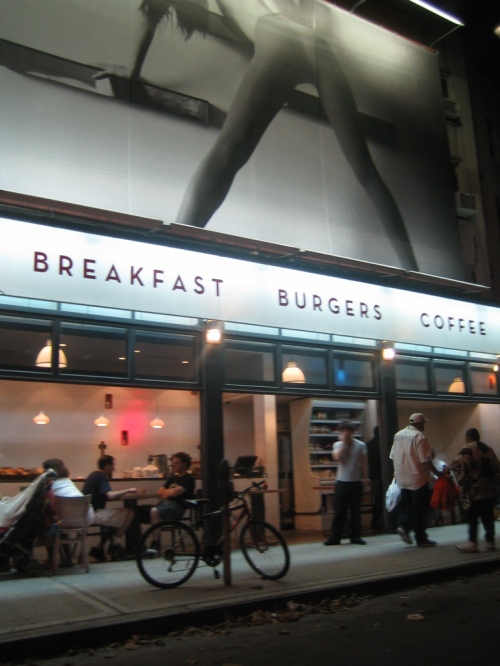 It was a humid evening when I arrived in New York last Friday night. Aching and weary having spent most of the day aboard a Lufthansa jet, I was immediately awoken by the series of advertisements which greeted me at JFK Airport. As I made my way through the endless maze of corridors leading to immigration, my eyes were bombarded with the repeated image of what appeared to be a sort of executive Etch-a-Sketch, but which upon closer inspection was in fact a device they’re calling the Sony Reader. Some very clever people in Japan had figured out a way to compress multiple hardback books into one small tablet of brushed metal, allowing an author’s life’s work to be slotted into a holiday-maker’s carry-on luggage.

Upon learning of this revolutionary product for the first time, two thoughts immediately struck me. 1) If the Reader is a success – which means within a year or two we will be adding it to that cluster of gadgets we all believe we can’t leave the house without – what will it mean for the future of the printed page? Will books become obsolete? It certainly won’t help reverse the youngest generation’s already concerning preference for electronic screens over pens and paper (though could go some way to correcting posture among schoolchildren). 2) How long had I been on that plane?

I first came to New York City as a wide-eyed, highly impressionable 20 year-old. It was the sweltering summer of 1999, and I was achieving an ambition which had stood firm since childhood and throughout my teens, one which for some reason I had never imagined possible. As a boy, New York City may as well have been another planet, so remote seemed the possibility of ever visiting. The few people I met who said they had been left me in awe. Though apparently unattainable in reality, thanks to television New York was accessible daily. What I saw was a tough, gleaming city crammed with the tallest buildings and coolest people, where danger, excitement or something else entirely lurked on every street corner, and where the traffic and the music never stopped. I become all too aware of it, and the attraction was something not even my overworked imagination could fathom. It was the city for me.

Armed with a pocket fold-out map and my Pentax K1000, I spent every waking minute of that week absorbing the city like a sponge, memorizing every detail, taking in (and photographing extensively) every skyscraper, monument, museum, hot-dog stand and fire hydrant along the way. And I walked everywhere (though there’s nothing quite like the thrill of hailing your first yellow cab). I stayed in a hotel on the Upper West Side, and the greatest feeling of all was simply being on the street, strolling up and down Broadway, eating pizza by the slice, chatting with strangers and briefly living a life that could only ever be make believe. I went home with a case of NY-emblazoned merchandise and eleven rolls of exposed film, a changed man.

A lot had happened in the relatively short period which had ensued. Some would say the world had changed, but had New York? For better and for worse, it had, and it was a different kind of breathlessness which overcame me as Manhattan’s skyline rose into view from my taxi window. Reports claimed that crime had been declining since the nineties, when Giuliani began cracking down on the most minor offences, a trend which was supposedly continuing under Mayor Bloomberg. Meanwhile, the spectacular success of certain businesses had begun to monopolize retail space in Manhattan, resulting in a noticeable effect on the city’s physical appearance. There now seemed to be a Starbucks on every block, even in the traditionally less commercial neighbourhoods. In the Theater District, the vast billboards and blinking neon of Times Square had given way to Disney animation and state-of-the-art video graphics, which succeed in rendering even the Coca-Cola logo unrecognizable.

On the city’s not-so-mean streets, the NYPD’s azure blue Chevrolets, once immortalized by television cop shows, had been traded in for a fleet of nondescript white Fords. Those bouncing Taxi-era checkered cabs were long gone – now yellow minivans with electric doors drove tourists from airport to hotel. I read that all NYC taxis will be hybrid 4x4s by 2012. What next, floral cabs? (Oh, right.) Even more horrifying was that in response to its increasingly international population, every last one of New York’s iconic WALK/DON’T WALK lights had been replaced with a universal walking man/red hand. Now whether crossing Delancey Street or Abbey Road, the experience had become (almost) identical.

Practical types will say that change is inevitable, that cities must continue to evolve in order to survive and stay vital, and I’m sure many locals would have not noticed or cared about such relatively minor alterations to their city. But for reasons however superficial, I was becoming slightly disillusioned. Here I was, finally living in Manhattan, the pop-culture lover’s ultimate paradise, and not a DON’T WALK sign in sight. I began to wonder if even the humble pretzel vendor’s days were numbered. It was as if the New York I had always imagined, the city I’d inhabited in adolescent fantasies, was suddenly being transformed and taken away. I couldn’t help but feel I’d arrived too late. But it’s like when you meet people who say, “You should’ve seen this place twenty years ago.” What am I supposed to do about that now?

Still a little jet-lagged, I woke up early the next morning and crossed Second Avenue (upon orders from the walking man) to the coffee shop opposite. From the other side of the street the Chrysler Building was clearly visible several blocks in the distance, its soaring concrete and chrome piercing the cloud-filled sky like a needle. It wasn’t quite daylight, but inside the diner people were already tucking into breakfasts of eggs and bacon and pancakes. I took a seat at the counter and ordered coffee. Turning to face the window, I stared out and watched as the yellow cabs glided silently through the Saturday morning drizzle. Had I been foolish in clinging to a New York that is no more (or never was)? Maybe it doesn’t matter if NYC ’07 isn’t exactly the city I’d been exalting all these years. What I enjoy most about it hasn’t changed a bit, and what drew me to this place as a child can still be found everyday. Steam rises from manholes, water towers and fire escapes adorn every building, and people really do read The New York Times on the subway. And while there’s space enough in people’s lives for the printed page, there’ll be a place in mine for New York City.